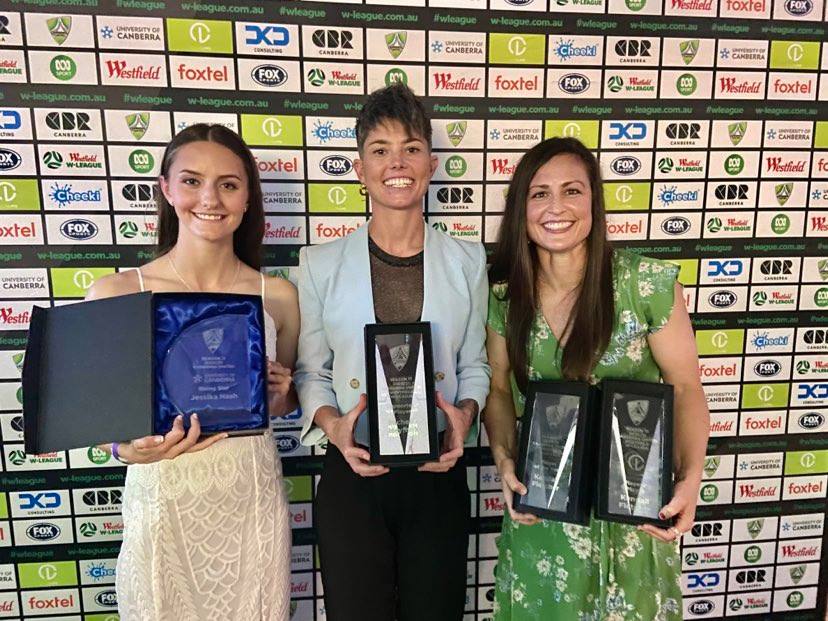 Kendall Fletcher was recognised by both coaches and players, taking home the top award, voted as the 2020/21 Player of the Year, while also being named the Club Lime Players’ Player.

Leading from the back, Fletcher played all but one game this season, making an incredible 568 successful passes, racking up 29 clearances, 22 intercepts and making 14 successful tackles.

Fan-favourite Michelle Heyman was awarded Supporters’ Player of the Year, after coming out of retirement and returning to the Nation’s Capital for a historic homecoming.

Heyman scored 10 goals for Canberra United this season, making 19 key passes and winning 6 tackles, whilst reclaiming her Westfield W-League goal scoring record from Sam Kerr and making her 100th appearance with the club.

University of Canberra Rising Star was awarded to Jessika Nash, who had a breakout debut season in the Westfield W-League. The 16-year-old started every game, constantly going up against players with far more experience under their belt, and coming out on top.

Lisa Garner was also recognised at United’s night of nights, awarded this season’s Volunteer of the Year award. Garner volunteered at every home game once again this season, coordinating the ‘ball bods’ and playing an integral role in match day operations.

Player of the Year – Kendall Fletcher